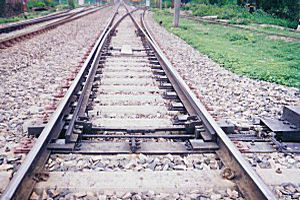 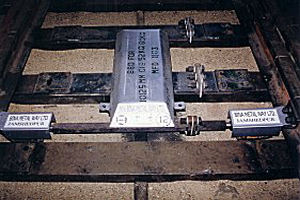 Railways are increasingly using curved switches in turnouts, since they enable smoother passage and also permit higher speeds. In curved switches, the distance from Actual Toe (AT) up to Junction of Rail Heads (JOH), where the machining of tongue rail head ends, is much longer as compared to the corresponding distance in straight switches which were used earlier. As a consequence, the tongue rail in curved switches is comparatively much slender in the stretch from AT to JOH.

Another consequence of the slenderness of tongue rails of curved switches is non-butting of the closed tongue rail against its corresponding stock rail at JOH, where a gap of 10 to 25 is observed between the two rails. This gap causes gauge variation in switch portion and vibration of tongue rail when wheel-flange presses against the gauge-face of tongue rail.

Curved switches are used in preference to straight switches basically for enabling smoother and faster travel. Therefore, there is a greater need to ensure proper alignment, gauge, fitment etc in curved switches. The problems noticed in curved switches as discussed above, defeat the very purpose of their introduction.

M/S. Bina Matal Way Limited (BMW) have evolved a new design of Spring Setting Device to address this particular problem. When this device is located near and connected to the Last following Stretcher Bar of the switches, it ensures the following:

The new design of SSD was evaluated by the Indian Railways' Research Organization (RDSO). Finding the design satisfactory, over 350 Nos. of SSDs of BMW make were purchased by Eastern, Konkan & Western Rlys. Out of these, over 250 Nos. have been laid in track as per information available with BMW. They are reportedly performing to the satisfaction of P. Way and Signal officials.

BMW have made their SSD also to suit this type of articulated movement of tongue rails. As such, whatever may be the system of tongue rail/ stretcher bar connection and whatever the pattern of movement of the two tongue rails, BMW is in a position to supply SSDs to suit that specific requirement, while ensuring adequate flange-way clearance in the open switch and proper butting in the closed switch.